A750 hovercraft is designed for the following purposes:

– transportation of heavy and oversized cargo, wheeled and tracked vehicles, drilling equipment and construction materials from lying out vessels to points not equipped with moorings.

Air-cushion consists of three inflatable balloons, bow, stern and central skirts. The bottom surfaces of the air cushion are protected against wear and damages with  polyurethane coating. The pressure regulation system in the lower balloons allows you to change the pressure in motion and during parking. Vessel movement is controlled by air rudders mounted behind the main propellers. Air rudders are driven by the hydraulic system.

Propulsion system consists of two counter-rotating adjustable pitch propellers in rings. Hydraulic control system enables  to change the angle of the blades and provides a reverse thrust by means of the main propellers.

The hovercraft is steered via air rudders installed behind the main propellers. Air rudders are driven by means of the hydraulic system.

Interior layout and equipment. The crew cabin is equipped with 3 seats and the control panel.

If necessary, the craft can have a cabin for crew accommodation with 3 beds, a desk with drawers for utensils, a hanger for outer clothing. In the cabin there can be installed a refrigerator with a volume of 40-60 liters.

The toilet is equipped with a washbasin and a toilet with sewage system and storage tank.

The crew cabin is equipped with an air conditioning system.

Electric equipment. The on-board electric network is based on 24 V direct current.

The power supply of the 24 V on-board network can be provided from the coastal source 220V, 50Hz via on-board 600 W charger/rectifier.

Also, at the Customer’s request it is possible to install a self-contained diesel generator connected to 220 V, 50 Hz network.

Exterior lighting is provided by spotlights and fog lights. To perform mooring and maneuvering in narrow waters a swivel search light controlled from the wheelhouse can be installed.

Cabin windshields are equipped with wipers.

To prevent freezing of the windshields when driving on the open water at sub-zero ambient temperatures, the windshield can be made double-glazed and equipped with a washer with de-icing liquid.

Radio communication equipment. Depending on the area of the vessel operation the following GMDSS equipment for sea areas A1+A2+A3 can be installed:

• navigation radar with the means of displaying information and an electronic chart system;

Depending on sailing conditions, the composition and brands of radio communication and navigation equipment are determined together with the Customer. 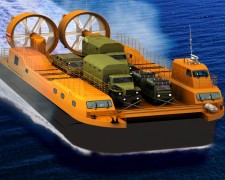 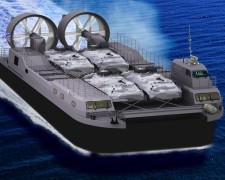